A story or novel has an inherent shape it wants to take, like a tomato plant or a rose bush. Writing it is a natural, unfolding, organic process. The story or novel will tell you what it wants to be, but you have to be patient — it can take a while for it to reveal its core. Piper's (THE ROMANTIC'S GUIDE) thoughts on the writing path...
(Quote in photo is by Richard Bach)
LINK TO VIDEO OF KATE ON NORTH CAROLINA BOOKWATCH
CLICK FOR A PODCAST INTERVIEW WITH KATE ON CAROLINA BOOK BEAT

(Scroll down page to "Where the Lake Becomes the River") Rousseau's Snake Charmer, a McCullough family friend in WHERE THE LAKE BECOMES THE RIVER
ABBY NANCE's review in THE AMERICAN BOOK REVIEW (28.5 KB)

Review in THE MIDWEST BOOK REVIEW:

"Living on the edge is hard to do, but sometimes you have to leap off it for a chance to do better. "Where the Lake Becomes the River" follows the nearly destitute Parrish. Unable to go to college, her life is a wreck with a dependent mother, and little chance for hope after a failed romance. When the civil rights movement comes to her town, the opportunity Parrish needs to break out of the monotony of life presents itself. "Where the Lake Becomes the River" is an exciting novel of change in one's life, and is sure to please."

ART TAYLOR INTERVIEW WITH KATE IN HIS METRO MAGAZINE BLOG:

Kate Betterton’s novel Where the Lake Becomes the River won the 2008 Novello Literary Award, an annual contest for writers from the Carolinas, sponsored by the Public Library of Charlotte and Mecklenburg County, NC, and underwritten this year by Charles Frazier’s Cold Mountain Foundation.

The novel’s protagonist is Parrish McCullough, an artistic, open-minded young woman growing up in Mississippi during the 1950s and 1960s. Much of the story centers around Parrish’s various relationships within her family, particularly in the wake of her father’s death, and several friendships and budding romances. In her narration, the book stretches back even before her actual memories, imagining her family in Japan on the cusp of her own birth; examines Mississippi against the backdrop of the Civil Rights Era; and elsewhere reaches toward the otherworldly, specifically her belief that her father has appeared to her from beyond the grave. A fascination with death and with the idea of life after death permeates the book, and those two subjects form a persistent theme in Parrish’s student essays, which help to separate chapters and which inevitably invite the concern, frustration or even anger of the teachers and counsellors reading and commenting on them.

Betterton, a practicing psychotherapist in Chapel Hill, NC, is currently in the midst of a book tour through central North Carolina. This Wednesday, December 17, at 7:30 p.m., she’ll read and sign books at the Barnes & Noble at New Hope Commons in Durham. In coming months, she’ll also appear at the Bull’s Head Bookshop at UNC-Chapel Hill on Thursday, January 29, at 4 p.m., and then at McIntyre’s Books in Fearrington Village, just north of Pittsboro, on Saturday, February 14, at 11 a.m.

Between stops, Betterton took some time to chat about her craft and the stories and beliefs that fed her first novel.

Art Taylor: Where the Lake Becomes the River doesn’t follow a strictly linear format, with new chapters picking up where the previous one left off. In fact, individual chapters might easily be read as self-contained stories in their own right. Had you planned the novel’s overall structure from the beginning, or was it that independent stories ultimately just coalesced into a larger narrative?

Kate Betterton: A story or novel has an inherent shape it wants to take, like a tomato plant or a rose bush. Writing it is a natural, unfolding, organic process. The story or novel will tell you what it wants to be, but you have to be patient — it can take a while for it to reveal its core. This book is really about immortality, the soul’s journey through the ages. To structure the book chronologically would kill it. Its time shifts are deliberate, attempting to capture something of that cyclical, timeless, circular feeling. The first chapter, about growing up in Mississippi, started as a story. I realized I’d left out the racism and intimidation of those years in Mississippi, and revised. This led to the Japan chapter/story and Harvey’s chapter/story, in which racism leads to the death of the narrator’s father. That opened up the chapters about ghosts, hauntings, the paranormal, as Parrish struggles to understand “The Truth About Life After Death.” So the book unfolded naturally, over many revisions.

Art Taylor: Those ghosts and those paranormal events, that shadow of death and the interest in life after death — is this just a literary trope, some brand of magical realism as literary strategy (as it seems to be in Lewis Nordan’s Wolf Whistle, for example), or are those aspects of the book rooted in some spiritual beliefs of your own?

Kate Betterton: A mystical spirituality is central in my life, and the novel’s cosmology reflects my own. Parrish’s exploration of spiritual and metaphysical mysteries mirrors my lifelong interest in these subjects. I’ve always been drawn to the mysterious and inexplicable — dreams, hauntings, synchronicities, reincarnation, life after death. The thin veil between this life and the next is the underlying theme of the book. Yes, it’s a book “about death,” as Parrish struggles to regain her lost spirituality, but ultimately, it’s about the fact that death is just a doorway to another reality, the end of one chapter and the beginning of the next.

Art Taylor: Like Parrish, you were born in Japan. Like Parrish, you grew up in Mississippi during a time of great racial tension and then worked at a newspaper during the rise of the Civil Rights movement. How would you describe the process of drawing on autobiographical elements on the one hand and, on the other, trying to create a satisfying piece of fiction?

Kate Betterton: Fiction takes off from real life like a winged creature emerges from a cocoon. “Novel” means something new. In fiction, experience, memory, and imagination merge into something new — often unexpected — with a life of its own. The writer gets to explore her interests and edges and quandaries while working hard to create an interesting tale for the reader. Hopefully, each gets something satisfying from the finished book. Reality’s just your starting point. I’m very interested in what happens when people of different races, faiths, or nationalities encounter each other and try — or not — to bridge the gap. The racism in my book is based on realities in the Mississippi of that era, but the events are all imagined. There was a “Papa-san” figure in my childhood, but the fictional “Mr. Takashima” of my Japan chapter wouldn’t recognize himself in the real man, or vice-versa; he’s become an entity in his own right, in the parallel universe where he resides.

Art Taylor: Apart from being a novelist, you’re also a psychotherapist. How did your work in psychology or therapy help you in constructing and understanding your characters here?

Kate Betterton: Growing up in a large, eccentric family developed my understanding of people, relationships, group dynamics, loyalty and betrayal, love, anger, conflict, grief, and so forth, long before I began writing fiction or became a therapist. Reading hundreds of novels over the years helped me most in learning how to build stories and characters, along with reading books on craft, and simply listening to what stories and characters want. In writing, you tell people a story. In therapy, you receive people’s stories and help them to reshape their lives in ways that feel more authentic and fulfilling to them. In each enterprise, you have to get your ego out of the way and, rather than impose your own will, patiently attend to and assist the naturally occurring process that is trying to unfold.

“The time is the late '60s, the setting a small town a few miles from Leland, where Blues Highway crosses 82. But this is fiction, a made-up version of the truth so many of us in the Mississippi Delta remember.
Parrish McCullough narrates a series of stories that blend together to create her history, from her parents' rather unconventional union (her grandfather hired a Pinkerton detective to investigate his daughter's possibly unsavory fiancee) to her departure for a northeastern college.
Interwoven in this saga of family secrets, racial intolerance, ghosts and reincarnations is the land the McCulloughs have lived on for generations. The black star-filled skies and the rich earth are as much a part of the story as the eccentric McCullough clan.
All the true sons and daughters of the Delta—from river rats and debutantes to preachers, teachers and exotic worshippers of the Buddha—make an appearance in Parrish's life, and Betterton's book is like taking a trip with your favorite family storyteller.
This mesmerizing story of a young girl growing up in turbulent times, surrounded by friends, family and enemies, seems like our own, where everybody knows your business and most people accept your eccentricities. Maybe it is the Delta's new classic coming-of-age story.
Kate Betterton grew up in Greenville and now lives in Chapel Hill, North Carolina. Her wonderfully strange and complex novel won the 2008 Novello Literary Award, underwritten by Charles and Katherine Frazier's Cold Mountain Foundation.” --Augusta Scattergood (Google for her blog.)

ASHLEY WARLICK'S REVIEW IN TALK GREENVILLE (SC) (174 KB)
AND: Frauenfelder expands on his N&O review, on his Delicious, Mythic Blog, BREAKFAST with PANDORA
DISCUSSION QUESTIONS for WHERE THE LAKE BECOMES THE RIVER (29.5 KB) 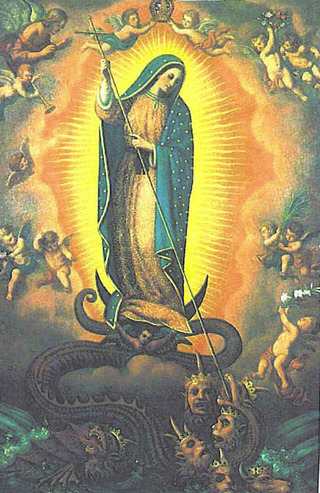 The Woman Crowned with the Stars, Cloaked with the Sun, Standing on the Crescent Moon, Casting Down that Old Serpent At Last